by Professor Karen Boyle and Melody House at the University of Strathclyde, and Talat Yaqoob founder of Pass the Mic.

Read the previous blogs in the series here:

PART 2 of our Pass the Mic media monitoring study focused on Scottish news media over nine days from Saturday 1st May to Sunday 9th May 2021 and included television, newspapers, web news and twitter (see Table 1 for a list).

In our first study, we focused on all stories reported in the Scottish news media: 28.5% of these stories were not about local or national Scottish news. One of our key findings was that the majority of women of colour who appeared in our news media appeared in stories not about Scotland.

In this second stage, we wanted to focus on stories about Scotland – those over which the media organisations involved in Pass the Mic arguably have most control. Our sample period included the Scottish Parliamentary elections on Thursday 6th May: by focusing on a period with a major Scottish news story we increased the number of stories available for coding. Media monitoring of election coverage in the UK is well-established, however, it is notable that these studies have had little to say about the specific representation of people of colour, and that Scottish elections have not typically received this kind of analysis. As Pass the Mic initially emerged from the work of Women 50/50, gathering data about Scottish election coverage was of particular significance to the wider project of which this study is part. We also knew there was a strong likelihood the 2021 election would see the election of the first women of colour MSPs: we were hopeful this would enable us to analyse stories specifically about women of colour which were thin on the ground in our first sample. Finally, it is worth noting that we extended our second study over nine days in recognition of the impact of COVID-19 on election counts and declarations. 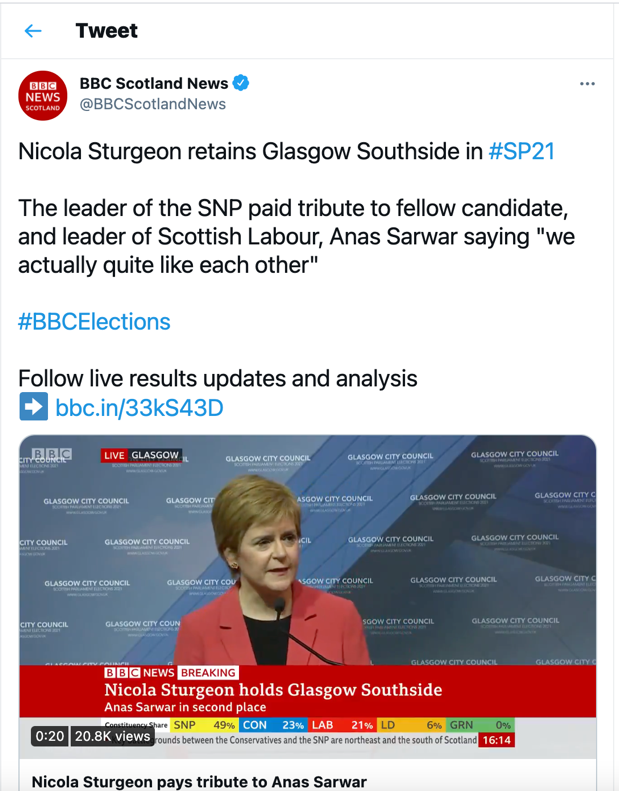 Across all platforms, we focused on news and opinion which was set in Scotland or included reporting from a Scottish angle. So, for example, a story about Westminster politics was only included if Scottish politicians were mentioned or quoted, or if implications for Scotland/Scottish constituencies were considered. As before, we did not include editorials, advertising or sports stories unless these were presented as news, i.e. within the main news bulletin, or on the front pages of a newspaper. For television, all news stories relating to Scotland in each programme were coded. For newspapers and web the top 20 stories of this kind for each outlet were coded. For twitter, we captured our data daily at 6pm and included all tweets about Scottish news from the prior 12 hours, up to a maximum of 25 tweets per account. We focused on tweets only, not retweets, replies or comments. We didn’t code direct duplicates (i.e. if @STVNews retweeted themselves), but did include different tweets linking to the same web story where different images or text were used.

Live election coverage required a slightly different approach. Over the election period, the news sites maintained live blogs which unfolded over several days. Each day’s live blog was coded as one story. For both live blogs and twitter news, we did not include announcements of constituency results (e.g. Figure 1) unless they contained some additional commentary or analysis (e.g. Figure 2). On the same basis, we excluded newspaper stories which listed results with no commentary or analysis (these were carried by most papers on Sunday 9th May). On television, rolling coverage of the election results – typically spanning many hours – replaced a number of the regular news broadcasts on Friday 7th and Saturday 8th: these were not included in our analysis, leaving us with 24 television programmes to code across the 9 days.

In total, we coded 3843 news stories (see Table 1): 112 on television; 1119 in newspapers (there was one day when the Scottish Sun only had 19 news stories about Scotland); 1213 web stories (reflecting the fact that not all outlets carried as many as 20 new stories each day); and 1399 stories on Twitter. It is worth noting that the beginning of our sample (Saturday 1st – Monday 3rd) coincided with a social media boycott by sporting organisations. Whilst we did not include sports’ media in our analysis, the Scottish Sun participated in the boycott and did not post new content on these three days, demonstrating the importance of sports stories to their Scottish news agenda (Figure 3).

As in our first study we focused on who made the news both as journalists and as people in news stories and gathered the same additional information as in part 1, with some minor additions (Read the methodology and coding schedule). Specifically, we added two special questions, noting whether the story was about the Scottish election, and whether the person coded was a party leader. We also added questions about family role, and whether or not they were presented as victims or survivors. However, in the event, the dominance of election coverage meant there was little to say about these latter categories.

Although our specific focus on news about Scotland might lead us to expect that our news population may more closely mirror the Scottish population (where the 2011 census identified 4% of the population as not white), there are a couple of important caveats to this related to the big stories in the Scottish news that week.

First, and most significant, is the impact of the election, which was the focus of 43.4% of all our stories. Between our first and second coding period, Anas Sarwar was elected as the leader of the Scottish Labour Party. It is to be expected that, as the leader of one of the five major parties in Scotland going into an election, the presence of Anas Sarwar will have had a significant impact on our data. Indeed, we found that Anas Sarwar alone made up 40.9% of references to people of colour in our dataset, and 55.9% of all men of colour (see Figure 4).

Figure 4: proportion of Anas Sarwar in the news

Second, the impact of COVID-19 continued to be felt, although less markedly than in our first period, partly because the daily COVID briefings were suspended during campaigning. Even so, 14.9% of stories were related to COVID (compared to 39.3% in period one). There were two key developments in the COVID-story in this period: nationally, the impact of the loosening of restrictions from 26th April; internationally, the rapid spread of the COVID Delta variant (then still referred to as the Indian variant). At that time, the Delta variant was still predominately in India but, given its catastrophic impact, we expected there would be some acknowledgement of how this impacted the Indian-based families, friends and colleagues of diasporic communities in Scotland. However, this was not the case and we will reflect on this more fully in a future blog.

A third story which we anticipated might impact on our findings was the social media boycott by sporting organisations mentioned above. In a UK context, this was centrally linked to ongoing discussions about racism in sport precipitated by Black Lives Matter. However, in the Scottish context, it was telling that news coverage focused more generally on social media abuse and far less centrally on racism.

Finally, although they did not massively impact on our findings in relation to the presence of people of colour in Scottish news, it is worth briefly detailing two other big stories of the week in the Scottish news media. Reports of sexual harassment and assault by BAFTA-winning Black English actor Noel Clarke broke on 29th April and were widely reported across UK press in the following days. We did have a handful of stories which referred to the Clarke story in a Scottish context, but this did not have the impact on our data which it would have had had we included all stories in Scottish news media. Another celebrity/crime story which attracted widespread coverage in our coding period was the trial and conviction of Sean Orman for the murder of Trainspotting 2 actor Bradley Welsh. Whilst the majority of people in stories about the Welsh murder were white, it is worth noting that “race-hate killer” Imran ‘Baldy’ Shahid was referred to as a prison associate of a key figure in the case, meaning that a man of colour was identified as the perpetrator of racist murder. Although these stories were not typically about racial in/equality, this is nevertheless an interesting context to keep in mind when we come to discuss stories about racial in/equality specifically in a future blog.

So, with all this in mind, where did people of colour appear in news media coverage surrounding the Scottish elections? The next blog presents our key findings.